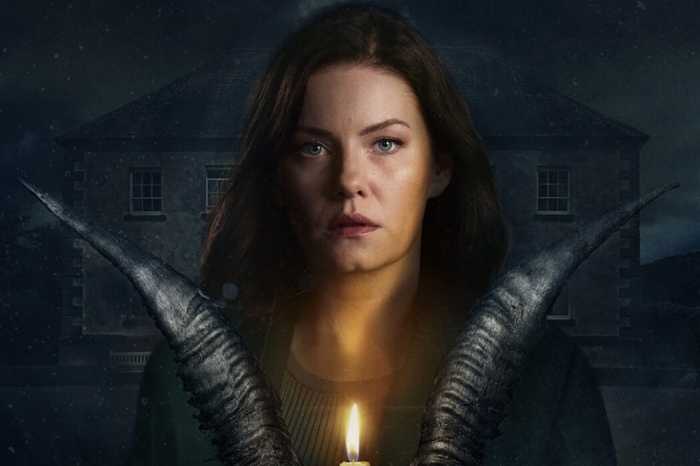 When it comes to horror, I’m always rooting for a win. As with any film, of any genre, I go into it hoping to be elated, engaged, and by its end, proud.

With The Cellar, the film started by intriguing me right away. A family moves into a new, obviously creepy house, and there are haunted vibes that are hard to ignore. Yet, somehow, they do. Keira (Elisha Cuthbert) and her husband and co-worker Brian (Eoin Macken), daughter Ellie (Abby Fitz), and son Steven (Dylan Fitzmaurice Brady), check out the strange home, including the ominous cellar. Ellie seems to be the only one noticing the glaringly obvious TURN BACK signs, including strange mathematical symbols above the doors.

For me, the beginning and the end are really what works (with a middle section that tries way too hard to be a combination of horror tropes). There is a very creepy scene with Elisha Cuthbert on the phone with her daughter who is terrified as she has to go to the cellar when the power goes out. As she steps down she counts (which is her mom’s suggestion to combat fear, but it also ironically ties into the narrative too? HMM…). It’s a suspenseful sequence as her voice changes, almost stilled, soulless, eerie. I felt like this was going somewhere intriguing. Then it halted that impulse with a regression that reminded me of more successful, past horrors.

When her daughter then disappears, it’s clear that this new home the family got at a steal (shocker) isn’t so inviting. At first, everyone seems to think she’s run away, but her mother knows something more sinister is at play. Their relationship is clearly fractured early on (partly because of her parent’s job with social media and influencers, and her own struggles there) but it’s something that isn’t fully developed.

In fact, there are several moments that invoke a sense of a chilled, endless space, with visuals that stick with you. There’s a scene where the stairs to the cellar seem to go on forever, and you’re left wondering… where does it go? What kind of hellish arrival will await this family? If only they had leaned into that creepy impulse, this film may have gone another way.

Brendan Muldowney writes and directs, and while The Cellar was disappointing to me, and I truly wanted to love it, I’m still curious to see what he does next because there is some value to take away. One of the other biggest gripes with the film was the lighting, at times it was like we were completely in the dark, and it didn’t infer fear, just frustration.

Then the film pivots, leaning into its slow-burn too much. The insistence on horror tropes makes the movie fumble in its middle section, and even the last stretch, which shows some great promise, doesn’t make up for its downfalls. There are some interesting elements involving math (personally scary to me- HA) and folklore, but it doesn’t feel fully delivered. In some ways, its choice to go into “other dimensions” feels underdeveloped, and out there just for the sake of being “out there.”

Cuthbert is terrific, empowering as a mother trusting her maternal instincts that something is wrong and not giving up on her daughter. It was great to see her return to horror, but the movie doesn’t fully capitalize on an interesting idea. Instead, it lingers too much on its weak points, and refurbished brands, while losing the overall scope of what made it fascinating, to begin with. I can’t help but wonder what it could have been. This is what makes the film so disappointing to me: a premise that doesn’t take.

When originality seems so rare these days, it’s refreshing to feel inspired after seeing a film, especially when it’s a strange, surprisingly standout ghost story.

Elena (Callie Hernandez) runs into a friend she hasn’t seen for some time, Jessica (Ashley Denise Robinson), while looking after her grandmother’s home. The two head back to catch up, and she finds out that Jessica is trying to get away from her very insistent, relentless stalker Kevin (Will Madden). Elena, sharing some details with a person we only hear, after an intimate encounter, tells the story. A lot of what really happens is shrouded in mystery for a while, but it is clear both of these women are running from their own sort of demons.

There is an abundance of black humor worked within that makes this 70 minutes soar by. There are times when I was laughing out loud, and by its end, I was audibly saying, “aww.” I don’t want to give away too much, but within this property, there’s an underlying (and not fully explained) magical presence that traps ghosts in its midst. So, basically, if your body is brought to the property, you’ll be stuck there (though there are three ways to get rid of ghosts, as we soon learn).

Pete Ohs directs and also co-writes with Andy Faulkner, Callie Hernandez, Will Madden and Ashley Denise Robinson (talk about a collaboration). It’s a character-driven take on ghost stories, giving us a personal and yet entertaining foray. At times chilling, at times ethereal, Jethica hits some key, ghoulish notes.

The environment of New Mexico is not only utilized but also used to enhance the sensation of these characters’ isolation. It’s beautifully filmed, with some terrific long shots.

There’s a lot to unpack with Jethica, more than you may even realize until the credits roll. It wields its humor with a sharpness that never feels forced but still manages to make you feel.

It simultaneously seems ominous and yet hopeful. It mixes genres, and with strong lead performances, the film keeps us wondering what exactly will happen. Even as the movie came towards its close I wasn’t sure, and I was worried it would be anti-climatic. But, by its finish, I was happy with its decisions and it felt warranted. I can imagine others handling this differently, but its sensitive end felt more in tandem with the story being told.

This shows how a low-budget, minimalist approach can be effective, especially when the characters and themes loom so large. The supernatural, the dangers of stalkers, and the sense of connection and contentment all play a role in this intriguing mix. There’s clearly love put into this picture. It portrays stalking in a real way, while also expressing vast amounts of humanity and charm.

Quirky, hilarious, and somehow cathartic, this movie perfects just the right amount of earnest charm. It maximizes on its dry humor while honing it’s bittersweet mentality and terrific performances, all residing within an unique ghost story. Ultimately compelling and wholly original, I loved Jethica. So far, this festival’s standout!