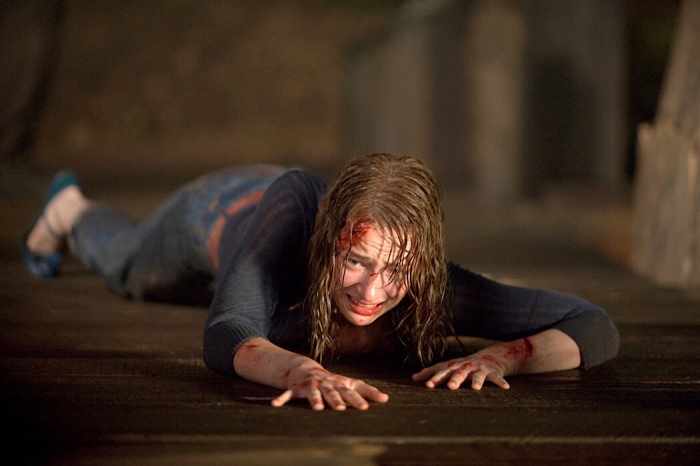 For most of us cinephiles, we remember the first time we saw a movie, whether it be in the theater, or at home. If the film shakes you, positively or negatively, there’s a residue left that seeps into your memory and makes it challenging to let go. Well, I don’t want to- so I’m going to highlight some Kristy horror history for this wonderful, special, month of October.

It feels like the right time to dive into the fun corners of the spooktober catalog with one of the more inventive horror-comedy experiences I can remember having. By that, of course, I mean, The Cabin in the Woods.

When I first heard of the film I wasn’t entirely sure what I would get. I went into it unknowing, unsure, and came out, ultimately impressed.

From the beginning when we are introduced to Steve (Bradley Whitford) and Gary (Richard Jenkins) two seemingly innocent, mundane workers in ties, you’re intrigued. When the title cards hit with a scream in blood red after “are you even listening to me?” I was like, oh hell yes, I am. What unspools after that is both unexpected, and simultaneously expected because it uses cliches in inspired fashion.

“The Lambs have passed through the gates”

College friends Dana (Kristen Connolly) Curt (Chris Hemsworth) Jules (Anna Hutchison) Marty (Fran Kranz) and Holden (Jesse Williams) are headed to a secluded cabin for the weekend. Seems harmless right? Somehow, even when they meet the “harbinger” a role invented in the genre just to warn off the characters of their impending doom, they progress.

Co-written by Drew Goddard (who directed it) and Joss Whedon, The Cabin in the Woods is filled with a talented cast who balance the straddling of genres efficiently, while concocting a structured, witty script. Even in some of the more absurd moments, there’s a feeling of real drama and terror for these characters as they react, to the best of their ability, in an impossible situation. Against all odds (and trust me, they are against them) they do their best, and it’s heartfelt, once things get really, serious.

Despite the jokes that land and the self-awareness there’s still a level of fear as characters meet unfortunate circumstances, and a growing curiosity as to what, exactly, the bigger picture, is.

Not only is still movie blisteringly funny at times and wildly clever as it makes fun of every trope that horror uses, but it’s also got a wicked twist that makes the final chapter genuinely creepy. Where the movie goes (and if you somehow haven’t seen it I don’t want to spoil the lovely reveal) allows it to squeeze in dozens of movie monsters in a span of like twenty minutes. I’ll just say this, should you know of what I’m referencing: I love that sequence, it’s gold.

This is definitely one of my comfort horror watches this time of year because I find it to always be a delight. The sheer reality that a movie can make you laugh out loud one moment and yet still be filled with a savvy intelligence that can surprise you, is something to be lauded. Not only does it highlight obvious contrived elements of the genre, but even the more deeper-level ones, which makes this horror-comedy more evolved than many of its predecessors.

It manages to be a lot of things all at once and it excels in every avenue. I have a hard time finding things to dislike about this movie every time I watch it. The fact that there can still be new takes on ideas already done, makes me so hopeful for the genre and for film in general, that I want to dance.

While being “like” so many others, it’s unlike anything you’ll see. It’s weird, hilarious, and actually scary- The Cabin in the Woods has it all.