Resurrection had me scratching my head in ponderous turmoil more than any other film at this year’s fest. On one hand, I was applauding Rebecca Hall’s spectacular performance (when doesn’t she though, really?) On the opposite side of things, I found that the film struggles with the fatigue it puts on the characters, and subsequently the audience, by credits end.

And its ending goes really hard, kind of emulating Titane but without the tenderness. The final scenes feel harsh and shocking, heavy on ambivalence. That’s not to say this doesn’t have it, it certainly does. I’m actually grateful for its final shots because it seemed like the director made a choice and decided to just go there. Not to mention that it is worth it alone to see Rebecca Hall give such a tour de force.

Margaret (Rebecca Hall) and her daughter seem to live a fairly safe, fruitful life, but as we often see when her daughter Abbie (Grace Kaufman) – who is on the cusp of leaving for college – leaves or does anything reckless, she is very worried. It’s normal for mothers to be concerned, but as Resurrection gives us tidbits of explanations for what happened to Margaret in the past it becomes painfully clear that it was something very bad. Not just bad, but bizarre, horrifying. Some of the storytelling is aimed unevenly, making aspects harder to take in.

Enter the menacing Tim Roth as David. The first time she sees him she has a panic attack and that fear and hold he has over her is only magnified as we scrape away the armor she’s built up to protect herself from this, well…monster. I won’t go into the details, but he’s quite creepy, and incredibly manipulative. It is one of the most effective portrayals of emotional manipulation I have seen, and it’s truly terrifying to see the grip he exhibits over her, even now, and when she finally gives us the excruciatingly disturbing monologue (to a coworker not quite equipped for it) of their past, it shakes you.

Andrew Semans writes and directs this feature that shows trauma astutely, emphasizing psychological horror in an intriguing way, that borders on incredulous. Even in its extremes though, it ultimately is conveyed believably due to his lead star.

We all have our pushing points, and Margaret begins to unravel; a complete opposite of what we see in the beginning of the film: disciplined, put together. Her past comes back to unnerve her, but she’s strong and won’t give up without a fight.

Resurrection isn’t perfectly done but it brings such an intensity that it’s difficult to ignore. The performances alone are electric. It’s outrageousness will either impress or disgust (maybe both) but you won’t forget it. It bewildered me some. 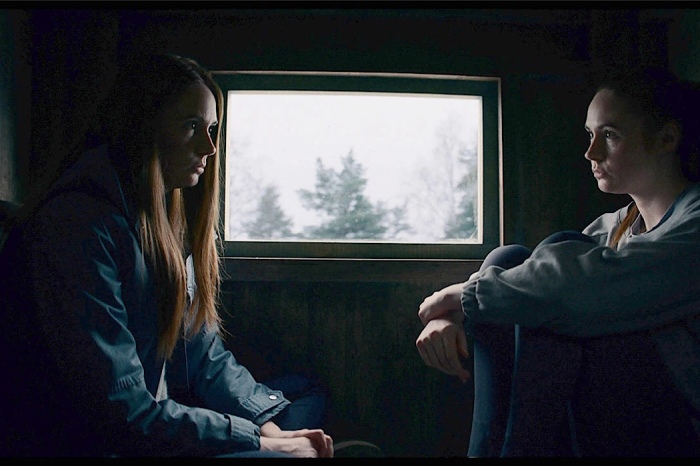 When Sarah (Karen Gillan) finds out she has an incurable disease that will take her life, her next step, obviously – is to choose whether or not she wants to get a clone of herself made. Because, of course, in Dual‘s reality, that’s not only an option, but it is encouraged. It allows you to prepare your loved ones for your demise, and make it easier when you’re gone, because, well, a version of you will remain.

There isn’t a whole lot of consideration, but an hour later and we’ve got two Sarahs.

When she receives the good news that she is no longer dying, she is told her clone is set to be recommissioned. Unless, the double wants a life for herself, then she can request a duel to the death. For there can only be one Sarah.

Not only that, but after some time, the loves ones in her life seem to prefer the replacement. Overall, Dual‘s future and Sarah’s apathy towards existence is pretty damn bleak. By its close, I can’t say that aspect has changed much, but it’ll leave you thinking, and hopefully laughing along the way.

In one of her best performances, Karen Gillan nails the dry deadpan, bouncing between intentionally stoic and yet infallibly human. Before this happened she was in an unhappy relationship, brimming with loneliness and complacency for life. When she finds out she’s sick it strikes as more inconvenient than tragic, but by the film’s end, she displays a ferocity that makes her rootable.

This isn’t a film teaming with likable characters, and everything is given to us in a matter-of-fact way that’s both awkward and strange, yet delivered in a way that makes the audience feel like the odd ones. It pulls some inspiration from Yorgos Lanthimos’ The Lobster.

That’s also part of the charm. Stearns’ subverts expectations throughout the movie, making it hard to know exactly where things will go next. It’s tragic, and it is cynical so it’s bound to be divisive among viewers. The purposely stiff performances and mashup of tones and genres may make some woozy.

I like my science fiction film to have an element of the strange with a clever bite. Dual most certainly has that and there is more to appreciate than snicker at. Its bold ideas kept me intrigued, and was not at all what I was expecting, proving that Riley Stearns has a signature style that can really entertain. Aaron Paul plays Trent her trainer for the dual, and he is also hilarious. Some of their scenes are my favorite within the film, including an unexpected dance lesson and a slow-motion fight training session. For the most part though, this is Gillan’s film, and she manages to hold it the whole way through.

I found myself consistently engaged, curious where things would end up. But we didn’t need a dog to die, (just saying) and preparing anyone who needs to know it prior to going in.

Little flourishes, especially when it comes to the comedy, really sold me on the film. The narrative leans on humor more than the intellectual, which doesn’t always pay off. Did it astound? No. But, it took its swings, and finished with a bold finale.

With absurdity in troves, Dual takes an introspective approach and consideration for the will to live and claim your life. The dark comedy sci-fi has a lot to appreciate, especially the deadpan delivery and quirky storytelling choices (love the dialogue). Karen Gillan & Aaron Paul are pitch-perfect.

Bottom line: Don’t get a clone.